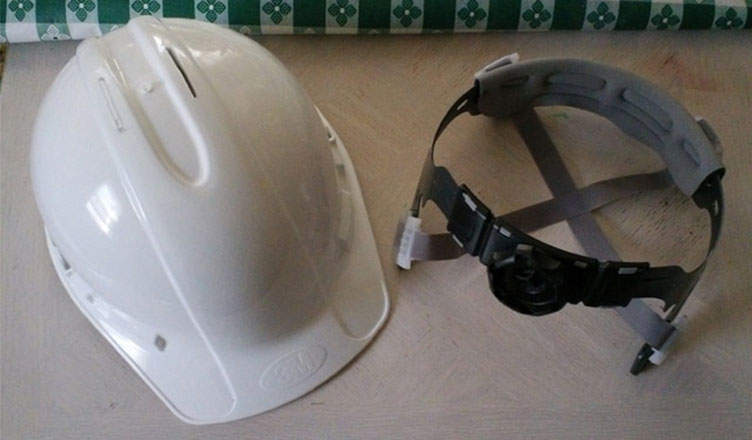 The bicycle helmet actually worked out well and looked nice but, as mentioned previously, it’s too expensive for this purpose and I wanted to continue using it as a bicycle helmet. It was fine for testing, though. If I had a criticism about it, it’s not quite as stable as I’d like it to be, mainly because of the bulk.

The cheap skateboard helmet was not a good idea–the ratchet in the back broke the first time I tightened it. Good thing I wasn’t planning on using it for skateboarding.

So here’s what I wound up using: a hardhat made by 3M, purchased from Home Depot for about 9 dollars. Make sure you get the kind with a ratchet suspension. Tip: the white helmet is a few dollars cheaper than the yellow one. First, I drilled four holes in the top. The holes are spaced to slightly wider than the 1-1/2 inch width of a strip of a Velcro One-Wrap strap we’re using to attach the PS Move device. Then I used a utility knife and a metal straight edge to lightly score the edges of the slots I want to cut out. Do this gently and carefully so as not to damage the helmet or, more importantly, cut yourself. Once you have the lines scored, carefully go over the lines over and over again, using only slight pressure, until the knife cuts clean through the helmet. I cannot stress how careful you must be–these knives are very sharp. Under the PS Move is a small piece of foam rubber. It’s long enough to support the base, and short enough not to interfere with the trigger switch. Later tonight, I’m going to glue this pad to the helmet using E-6000 or some kind of contact cement.

You may have noticed that helmet has been painted with gray primer. This is because the original plastic surface is very shiny and reflective. The paint can actually be any color except black and the key is that it needs to have a flat or matte finish. Why? If you’re recording with Kinect, shiny reflective surfaces will bounce the IR rays away from the sensors, and you want to avoid black because it may absorb IR rays; if you’re recording with PS3 Eye cameras, the reflective surface may confuse the tracking system.

As is, this rig is very stable so long as I’m not jumping up and down. The one thing I’d like to add is a chin strap, which should solve this issue. There are loops on either side of the helmet, so it should be easy to add a strap. In a future entry, I’ll post the final version of the helmet with the chin strap. plus some videos of the helmet in action with results.

Update: Added the chin strap and it’s all awesome now!