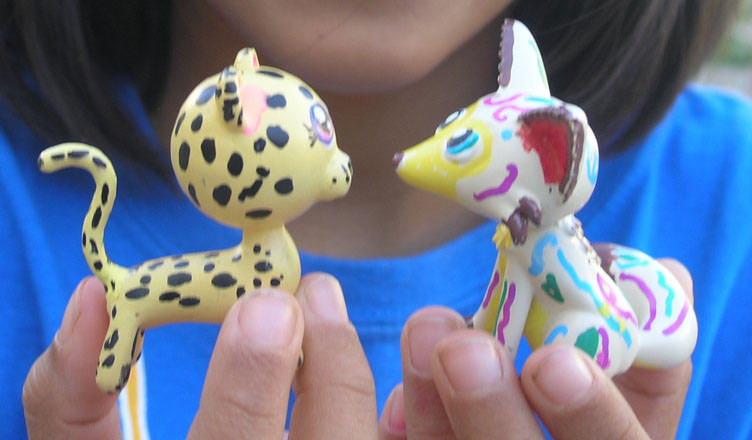 Back in September of 2013, my daughter Sienna approached me about printing her own toys on the Form 1 printer. Sienna was six years old at the time and she was obsessed with Littlest Pet Shop toys. She had about 140 ‘petshops’ so you might think she had every animal in her collection, but she didn’t have her favorite wild animal: the cheetah.

This, according to my daughter, is why 3D printers were invented. Here is the design she presented:

Using a 3D program called LightWave 11.6 Modeler, I helped her block out the figure using primitive shapes. Sienna did some of the modeling but mainly she art directed me to build what she wanted to exacting specifications. That’s okay…as a parent, I’m used to being her tool.

We converted the LightWave object into a voxel-based volumetric object in 3D Coat. Using 3D Coat’s smoothing brush, we blended edges at the joints. Sienna then showed me a lion ‘petshop’ from her collection and asked me to sculpt the mouth of her toy to look like the lion’s. Then we added some definition around the eyeballs and snout.

When Sienna was satisfied with the sculpture, we ran it though 3D Coat’s Autopo process to generate a printable polygonal mesh. Autopo did a decent job retopologizing the surface–the polygon flow for the muzzle and ears turned out surprisingly well. The only really rough bit was the area where the front legs joined the chest. To fix it, I deleted the polys in that region and manually re-meshed it by ‘drawing’ new polygons over the surface of the voxels.

The polygonal mesh was saved as a new .lwo file and then opened in LightWave Modeler. Looking at the Statistics panel, we discovered a couple of 2-point polygons that needed to be deleted. Finally, we checked the object using the Repair Mesh tool and exported an .stl file. For Form 1 compatibility, we chose the Up-Axis to Z option and set the Export Units to millimeters. These settings set the proper orientation and scale for Preform, the Form 1’s printing software.

Here’s Sienna’s cheetah in Preform. We decided to clone the object and print two. Sienna pointed out that there was enough space on the build platform for four cheetahs but I felt two was plenty for our first test.

Here are the cheetahs fully printed. Total print time was about three hours for the two two-inch tall toys.

After a ten-minute soak in an isopropyl alcohol bath, the toys are left out to dry and cure in a window sill.

The supports are snapped off and clipped from one of the cheetahs. A little sanding and filling comes next.

We picked up some yellow spray paint and paint markers from a hobby shop. Sienna was eager to get started.

Here she is adding details with the paint markers. Almost done.

And here it is next to the original cheetah painted by Sienna two years ago.

You might have noticed that the painted cheetah’s tail go broken. I want to print a new tail so we can fix it.

To make sure our first successful print with the Form 1+ wasn’t a fluke, we tried printing two copies at once:

I think her drawings skills have improved a lot.

As before, we started with primitive shapes in LightWave…

…and sculpted the details in 3D Coat.

Not that LightWave isn’t capable of detailed modeling, because it certainly is, but I feel I can get closer to a finished design more quickly using a voxel sculpting program like 3D Coat. In my experience, eight-year-olds have limited patience so I chose the fastest workflow I could think of. After of an hour or so of tweaking in 3D Coate, this was our final sculpt.

And after retopology, the fox is back in LightWave. After checking the mesh, the fox was exported to an .stl file.

The .stl file was then opened in PreForm. It’s worth noting that PreForm has seen a lot of improvements in two years.

Sadly, our first fox print failed. After discussing the failure with FormLabs, we determined that the gray resin I was using had expired. It has a shelf life of a year and they were actually surprised to learn I got the three cheetahs to print with my expired resin. I placed an order for a fresh bottle of Gray v2 resin and put off our project until it arrives.

When the new resin arrived, I thought I should print something small as quick test. A new tail for the old cheetah seemed like just the thing.

It came out perfectly! So the problem must have been expired resin after all.

This part took about 35 minutes to print at the lowest quality setting and I’m amazed by how smooth it looked. According to the printer, the fox was going to take about 2 1/2 hours to print, so I let it run over night.

In the morning, Sienna and I found this waiting for us.

We left the fox to cure while Sienna went to school and I took off for work.

It’s worth noting that leaving a Form 1+ printed part to cure in the sun all day long is not really recommended. It will cure the material but if you leave part in the sun too long, it can become brittle. It’s best to leave the part on the window sill or in a UV box till it loses it’s tackiness, and then spray the part with paint or a clear UV protectant.

When I get home, I remove the supports using a flush cutter and a small Xacto knife. Sienna was very pleased and she couldn’t wait to paint it. Then I dropped it on the floor and it broke. Oops! Too much sun curing, I guess.

Nothing new…it’s just two. I printed this pair overnight at a higher resolution. I had set the print quality to 50 microns. Both foxes together took less than 6 hours to print and they are visibly smoother than the 100 micons print (which was already pretty smooth.)

By this time, Sienna was chomping at the bit to paint her new fennec fox.

And In The End…

All done and the two year-old cheetah with the broken tail was nicely repaired too. Sienna has already come up her next designs and she’ll be posting pics of new toys she wants to make soon.

My Pants Do Vex Me