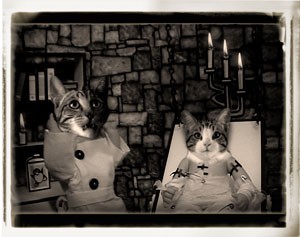 Alisa and I created Hello Frankenstein back in 2005 for Gothtober, a Halloween themed art festival. The festival’s theme that year was ‘Mad Scientist’. I had been wanting to make a movie with our young cats Sergeant Marshmallow and Toullie so the inspiration for ‘Hello Frankenstein’ came easy.

We had about a month to create our film and we really didn’t have that much time because, during the day, we were both busy creating animation and visual effects for TV commercials. That left us late weeknight evenings and a few weekends to work on the film. The first weekend was spent drawing the storyboard, designing the set and props, and we planned our schedule during the week. In our second weekend, we visited the local craft store and hardware store to buy materials for the sets, props and costumes. By Sunday evening, we had everything printed, glued, sewn and assembled in our living room. We shot the live-action footage using a consumer DV tape camera over the next four evenings and edited the movie the following weekend. The final week of evenings was spent keying, rotoscoping, and compositing the scenes, and creating visual effects. On the last day, with only hours to spare, we hand delivered the movie to our friends at Gothtober. And by ‘we’, I mean all of us: me, Alisa, Sergeant and Toullie.

Here’s a ‘highlights’ reel Sergeant and Toullie put together shortly after the film was released.

Anatomy Of A Brudders Comic